The Dinosaur Egg or Dinosaur Plum or Dapple Dandy Pluot® (Prunus domestica x P. armeniaca 'Dapple Dandy') is a pluot® introduced in 1989 as a complex hybrid "interspecific") that is 2/3 plum and 1/3 apricot, by cross-pollinating. Plum x apricot is a plumcot; plumcot x plum results in a pluot®, and plumcot x apricot produces a fruit that is 1/3 plum and 2/3 apricot, trademarked as an aprium®.

Pluots® are sweeter and less tart than plums, of low acidity, and high in vitamin A. They come in over twenty varieties (note my incorrect claim in one picture of there being more than two dozen varieties), including 'Dapple Dandy', harvested in late July in California, and having pale green skin with a red dapple blush; the flesh is pink. It's delicious and quite juicy - for a special treat, cut it in half and tease the peel away (it readily comes off). I'm sure the peel is nutritious, so I eat it. But then you're left with a dark red layer covering the pink inside - beautiful and very sweet!

I found a plum labeled "Dragon Plum" in the grocery store in late July 2005. However, I'm not sure if this is a generally accepted name. In July 2008, I found the Black Apricot - dark violet, it is juicy and quite sweet. 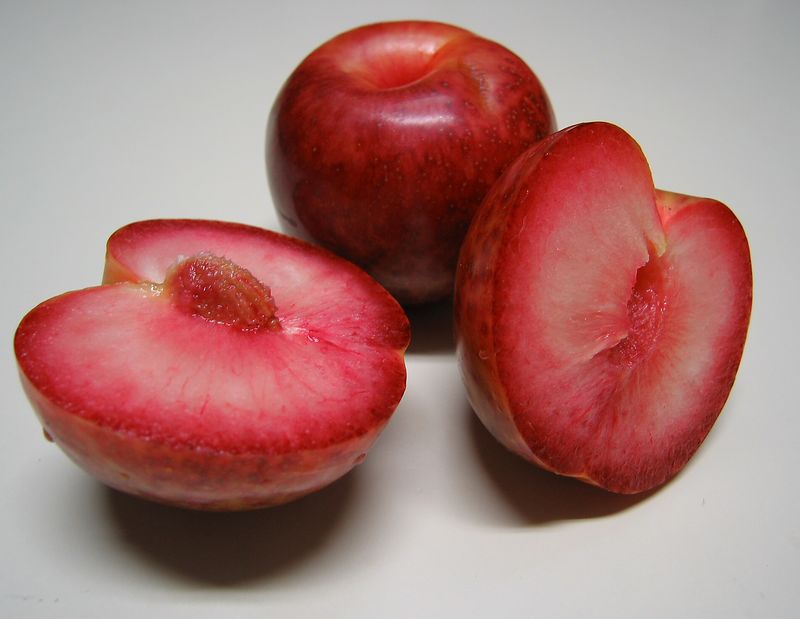 00aFavorite Pluot - one cut in half, one intact [full resolution&size]